I'm Zac, 20 and I live in London. I'm originally from Australia and have been living here for nearly 7 years now.

I've been into the occult since I was introduced to the neo-pagan current in the mid to late 90s... you remember the fad. RavenWolf, The Craft, etc. I moved away from that and primarily into chaos for a few years but once I discovered the Hermetic, Western traditions, I've been practising with a foot in each world.

I attempted to join the IOT and they asked me to come back when I'm 23... cheeky buggers, but I understand the quality control they must necessarily implement, considering the kind of attention chaos magick draws.

I've also been raised in the conspiracy current, so to speak, so while I used to buy into it wholesale, now I'm a little more critical with what I accept into my world view... although I most definitely see the hidden hands that guide and I am pursuing what needs to be done on a personal level to affect change in the world at large. Less confusion, less ignorance, more illumination and progress. I enjoy a non-theistic, Luciferian philosophy with regards to that stuff, with Lucifer as the personification of the highest attainment of the Mind.

It's great to be here and while I normally cannot be bothered to take part in discussion forums of this sort, I like what I have seen so far and I enjoy the work you guys have done with the torrents and have benefited from them so I feel I should get involved and give back where I can... 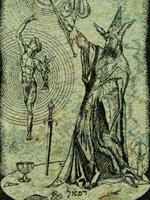 _________________
"Sacred Activism is the fusion of the mystic's passion for God with the activist's passion for justice, creating a third fire, which is the burning sacred heart that longs to help, preserve, and nurture every living thing." - Andrew Harvey

Some of your story reminds me a bit of my own. It's a little embarrassing to remember my own brief stint of neopaganism in the mid-90s! Haha, oh the memories... Also, I'm not originally from Australia, but I've been here for 5-7 years, depending how you look at it. About as long as you've been away.

I can appreciate your aversion to forums. The internet has a way of sucking one in sometimes that's actually quite disturbing and insidious. Gotta click your heels and repeat "It was only a dream..." every now and then.

alright, I've just gotta say it.... You're twenty, yet you got into neopaganism in the mid to late nineties? In '95 you would have been what 6 and in '99 you would have been 10? Granted, Silver Ravenwolf's "books" are written for the functionally retarded, but ten years old or less?

Chaos magick huh? In my experience Chaotes are 99% dipshits. They can't help themselves, they've convinced themselves that they are so outside of the occult mainstream that they are the definition of awesome. They can usually be identified through their use of words like paradigm, the use of pop-culture physics and math to explain magic and their constant practice of taking old magical ideas and giving them new names so they sound intelligent and original. example:

The only group more self involved than Chaotes are the Church of Satan / Temple of Set crowd (Behold our texts, which read just like Aleister Crowley's work if he was poorly educated white trash) But they are usually good for a laugh. Chaotes, not so much....

I mostly skipped the Neo-Paganism trend luckily. Right when it started I met some neo pagans on a BBS (ahh the good ol' days). I met them for coffee and they explained their beliefs and gave me a copy of Starhawk's book and some other authors book I don't even remember anymore. I promptly went home and read them both that night. I thought the whole deal was a little contrived and far too feminist for me (my apologies for being unable to feel guilty for having a penis). The next day I was at a bookstore and found Regardie's Golden Dawn and that was that. My dabbling in neopaganism thankfully lasted a whole day and a half.

Anyhow, welcome to the group and I apologize if my post sounds a little dickish, it's 9am and cold as shit here in the desert......

Err, nice to meet you too! Yes, I was 9 or 10 when I got into neopaganism. I read a lot of fantasy from a young age, was really into RPG games and was obsessed with the idea of wizards and magic and that lead me to buying my first occult book, Raymond Buckland's "Complete Book of Witchcraft". I completely bought in to the whole Wiccan explanation of history because at that age I didn't know any better.

It took many years of reading around and to-ing and fro-ing to learn the real recent history of magic and I became less interested in the Wiccan dual-but-polytheistic worldview.

Chaos helped me start practising magic more scientifically and less religiously. It helped me to realise I didn't have to pander to gods for magic to work. It helped release a lot of the crap I learned from Silver RavenWolf books.

I worked backwards from chaos into reading people like Eliphas Levi, Manly P. Hall, A. E. Waite, etc to become more interested in the Hermetic, Qabalistic traditions. I'm interested in building up a core practice towards attaining the K&C of my HGA.

ZacPhoenix wrote:I'm interested in building up a core practice towards attaining the K&C of my HGA.

In my experience, this can be an exceptionally formative quest - whatever the results! Bear in mind there's this course that you can participate in, and that might be a productive catalyst.

_________________
"Sacred Activism is the fusion of the mystic's passion for God with the activist's passion for justice, creating a third fire, which is the burning sacred heart that longs to help, preserve, and nurture every living thing." - Andrew Harvey

I figure that regardless of whether I attain it as described by Crowley and others, it's going to be an involved process that leads to many insights and developments anyway.

What course are you talking about...?

Thelema: A.C.'s Psycho-Spiritual Philosophy for a New Æon at UCB.
_________________
"Sacred Activism is the fusion of the mystic's passion for God with the activist's passion for justice, creating a third fire, which is the burning sacred heart that longs to help, preserve, and nurture every living thing." - Andrew Harvey

This may be a bit off-topic, but that little exchange just reminded me: Is there a way to change the way links appear in this forum? I think a lot of them are overlooked because they're not conspicuous enough.

neutralrobotboy wrote:This may be a bit off-topic, but that little exchange just reminded me: Is there a way to change the way links appear in this forum? I think a lot of them are overlooked because they're not conspicuous enough.

Good thinking! Hrm... It can be done manually:

I dunno if it could be changed for the whole forums though...